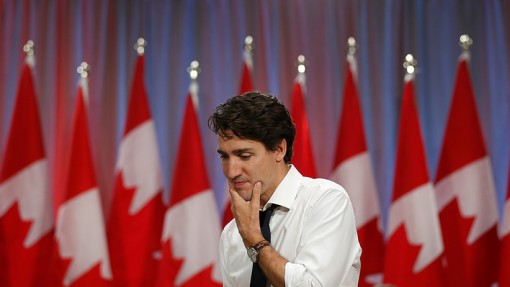 The Liberals should admit that its commitment to carbon reduction is increasingly untenable, writes a former TransCanada exec – Dennis McConaghy

Even prior to the election of President Donald Trump, it was evident that Canadian governments had come to terms with providing substantial incremental market access for Canadian energy exports, regardless of the impact that would inevitably have on the country ever meeting its Paris carbon emission reduction targets

Put bluntly, governments recognized the need for the cash flow that would come with increased oil and gas exports over the short and medium term in order to sustain their existing social welfare obligations, let alone increase them. The approvals of the Kinder Morgan TransMountain expansion, Enbridge Line 3 and Petronas Line 3 pipeline projects, which came before the end of 2016, attested to that reality.

At the same time, both the Trudeau and Notely governments have embraced carbon pricing as their pre-eminent policy instrument—an explicit carbon tax in Alberta, with a formidable initial stringency of $30/tonne starting in 2017, and federally a national carbon pricing standard that is substantially aligned with Alberta.

As well, Alberta has committed itself to an accelerated phase out of its coal based electric generation and imposed a cap on future carbon emissions from oil sands production, but no explicit reduction target in the short or medium term on absolute emissions within the province. As for the federal government, no significant interventions have been publicly contemplated, let alone implemented, in Canada’s basic energy systems that would accelerate emissions reductions.

Ontario withdrew its “trial balloon” of imposing draconian interventions in the province’s energy systems, such as removing natural gas to meet space heating demands and imposing significant electric vehicles mandates. Even so, the Wynne government has been defensive about its earlier initiatives to impose renewables into its electric generation mix, given the resulting negative impact on electricity rates to Ontario consumers. Even worse, the decision by Ontario and Quebec to resort to “cap and trade” with California, instead of a transparent carbon tax equivalent to what is applicable in B.C. and Alberta, has diminished the credibility of the federal government’s national pricing standard.

Saskatchewan rejects carbon pricing, while extolling its investment in carbon capture and sequestration, despite its cost being many times higher than current carbon taxes. Go figure.

Prior to Nov. 8, 2016, supporting KXL had been a moot point. The project was effectively off the table due to Obama’s rejection of the project back in November of 2015, coupled with Hillary Clinton’s position to not revisit that rejection, if she were to be elected President.

KXL has always been Canada’s most economically valuable pipeline project for moving Canadian dilbit to market efficiently. The actual Trump executive order, announced on January 24, was as facilitating as one could have reasonably expected, essentially inviting TransCanada to re-apply with the existing regulatory record from the Obama administration as sufficient validation for the project. But the order does include a required 60 day period after filing to negotiate any special terms required by the Trump administration of TransCanada. Whether demands for greater procurement from U.S. pipe suppliers becomes a material constraint on the project moving forward is unclear. But it is heartening for Canadian interests that the approval process is in the hands of Rex Tillerson, now confirmed as Secretary of State. He is uniquely positioned to convince the Trump administration that substantial economic benefits exist for both countries without any significant intervention in the current procurement and construction intentions of TransCanada.

Further last month, the British Columbia government finally endorsed the Kinder Morgan TransMountain expansion project—albeit after the provision of further financial contributions from the project to the province—moving the project closer to construction in 2017.

A reasonable prospect now exists that by mid year 2019, Canada could have well more than 2 million barrels of incremental pipeline capacity for Canadian dilbit. Depending on future commodity prices and improving production economics across the oil sands, this incremental pipeline infrastructure will enable greater crude oil production, perhaps approaching or exceeding in aggregate 5 million barrels per day. And of course incremental carbon emissions, notwithstanding the potential for some improvement in the carbon intensity of the oil sands over the next decade.

All of which would unfold in the context of a Canadian commitment under the Paris climate agreement to reduce emissions 25 per cent from current levels by 2030. As many in the environmental movement have observed the “arithmetic doesn’t add up” between that Paris commitment and incremental pipeline capacity with no other major intervention in how Canadians are allowed to use or export hydrocarbons .

But a more urgent challenge for those Canadian governments committed to carbon pricing is how it can be sustained in the face of inevitable competitiveness issues. The Trump administration is pursuing energy development policies that make even the current Canadian carbon pricing stringency potentially untenable.

The federal government should provide some rationalization of its various decisions, policy intentions and external realities for Canadians. Reasonably it should contain the following:

De facto this is where Canada is at, despite the Trudeau government not yet being ready to admit to it publicly. Such an admission is overdue.

As for the Canadian environmental movement, it would be salutary if it were to focus more on ensuring that carbon pricing was actually consistent across Canada via transparent carbon taxes, genuinely revenue neutral to taxpayers , and adjusted to preserve Canadian competitiveness. Rather than demanding dubious interventions in the economy to achieve carbon reductions regardless of cost, or even worse, obstructing the legal rights of those who would produce and transport Canadian energy products to market.

Dennis McConaghy is a retired Canadian energy executive with more than 30 years of experience, including at TransCanada where he was involved in planning and developing the Keystone XL pipeline. He is also author of the book “Dysfunction: Canada after Keystone XL.”