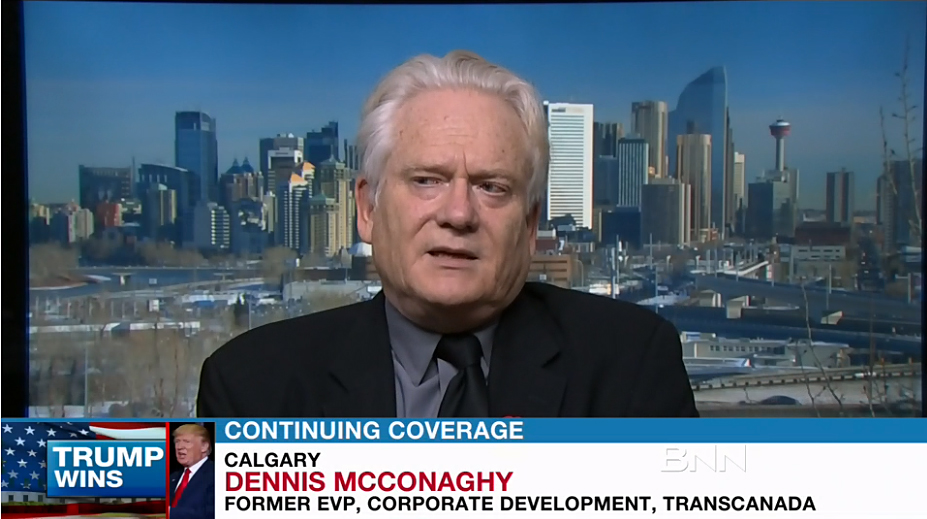 Donald Trump becoming the president of the United States means the Keystone XL project is “back in play,” says a former executive of TransCanada Corp (TRP.TO 0.22%), the Calgary-based company behind the controversial pipeline.

Dennis McConaghy, TransCanada’s former executive vice-president of corporate development, told BNN in an interview that Trump heading to the White House will likely breathe new life into the proposed project, which was rejected by U.S. President Barack Obama last November after seven years of reviews.

“We can all expect a Trump administration to be fundamentally, positively disposed to an approval of this pipeline project,” McConaghy said.

U.S. President-elect Trump previously said he would resuscitate a review process for the proposed 1,897-kilometre pipeline from Alberta to Nebraska within his first 100 days in office.

“As the transition to the Trump administration starts to unfold, I’m sure there will be engagement between TransCanada and that administration about how to  put this pipeline back to a regulatory approval process,” McConaghy said.

After Trump’s election victory was declared on Wednesday, a TransCanada spokesperson stated the company remains fully committed to building the project, and that it’s “evaluating ways to engage the new administration.”

Besides regulatory challenges, Keystone XL has also been tested by local landowners in the U.S., but  McConaghy said he doesn’t expect major challenges once TransCanada gets the presidential nod.

“My expectation is that they will be able to acquire the required right-of-way from Montana, South Dakota and Nebraska, provided they get the permit to cross the [Canadian-U.S.] border,” he said.

But McConaghy also warned that Canada should make further changes to its energy policy in the wake of Trump’s election victory. He urged Prime Minister Justin Trudeau’s government to rethink its position on carbon pricing – especially if Trump essentially “has no carbon price at all.”

“Wherever Canada positions itself on carbon pricing, it has to be aligned with its major trading partners and there’s no greater trading partner than the United States,” McConaghy said. “So this is a great moment of reset for the national government and maybe even Alberta.”