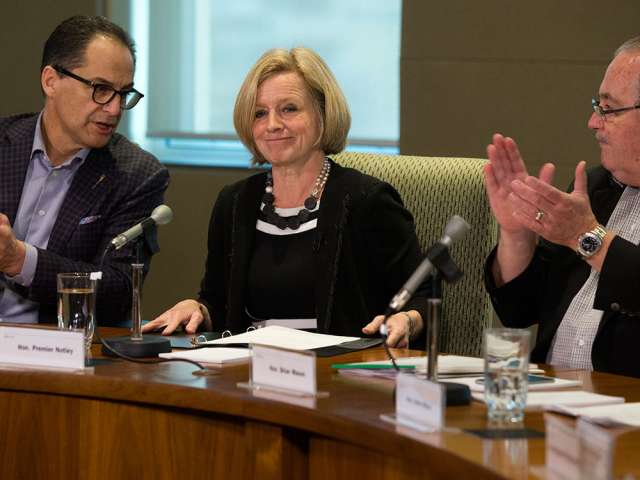 Credible climate policy in Alberta was never framed as a quid pro quo for market access. It’s time that Notley did just that

Before she became premier of Alberta, how deeply had Rachel Notley actually thought about the existential threat to Alberta represented by a world that actually was serious about dealing with the risk of dramatic climate change? And by a Canada that had become fundamentally hostile to any growth in the Alberta hydrocarbon industry?

One can only infer that after becoming premier she was convinced that implementing a credible climate policy based primarily on carbon taxes would achieve real accommodation by the rest of Canada, and certainly by the federal government. Alberta’s legitimate need for greater pipeline infrastructure would then have the social licence needed to proceed.

But she never made that linkage explicit. Credible climate policy in Alberta was never framed as a quid pro quo for market access. It’s time that Notley did just that and suspend all carbon taxes until Ottawa delivers its end of the bargain.

The federal government’s 2015 climate plan, introduced just before the Paris climate conference, imposed carbon taxes along with other interventions in the Alberta electricity and oilsands sectors, adding costs to Albertans and reducing investment over the short and medium term. Those carbon taxes were as severe as any imposed on other jurisdictions in North America or Western Europe. Since then Albertans have consistently and rightly asked, “What did we get for imposing carbon taxes on ourselves?” So far, very little.

The Energy East proposal, for a pipeline taking Alberta oilsands product to New Brunswick, was lost in no small part due to a dysfunctional regulatory process that evolved from either the malice or incompetence of the federal government. The Northern Gateway pipeline proposal was dismissed capriciously by that same government, which provided no substantive justification for shredding the National Energy Board’s recommendation for approval after five years of regulatory scrutiny.

And now Kinder Morgan’s Trans Mountain expansion project, having obtained approval from the federal government, faces new interventions by the current NDP/Green regime in British Columbia, which seeks to impose a de facto prohibition on any diluted Alberta bitumen shipping from the Burnaby, B.C., terminal, claiming that oil-spill risks must be studied still further. B.C. would disable the project notwithstanding federal jurisdiction while impugning the integrity and competence of the National Energy Board, which found that the project has already adequately dealt with the oil-spill risk.

One might have assumed that some implicit understanding exists between Notley and Prime Minister Justin Trudeau that the federal government will at least defend its own approval of Trans Mountain’s expansion. But to date there is no sign Notley had secured that, either. Trudeau has so far declined to unequivocally state that he will use all available remedies and powers to ensure its construction.

Make no mistake, this B.C. government gambit, and the uncertainty it engenders, will only strain Kinder Morgan’s will to persist with the project. Slogging through courts for the next two years is not a viable prospect with literally billions of dollars at risk. Time is now of the essence.

Notley has nothing to gain from imploring B.C. to reconsider or from trying to negotiate more “process” on oil-spill risk. Rather, she must insist that Trudeau intervene. To give her demand teeth, the Alberta government should immediately suspend its carbon tax on its citizens, businesses and industries until both the Trans Mountain expansion and Keystone XL pipelines are actually in operation. That goes to the very heart of what Albertans are asking today. What is the point of a carbon policy that does not actually achieve any accommodation on market access?

The choice for Trudeau becomes stark. He can let Trans Mountain collapse, showing indifference to the B.C. prohibition, and be forced to impose federal carbon taxes on Alberta. Or he can intervene immediately to use all federal powers to ensure its construction and operation. At the very least, Alberta suspending its carbon tax forces Trudeau to choose.