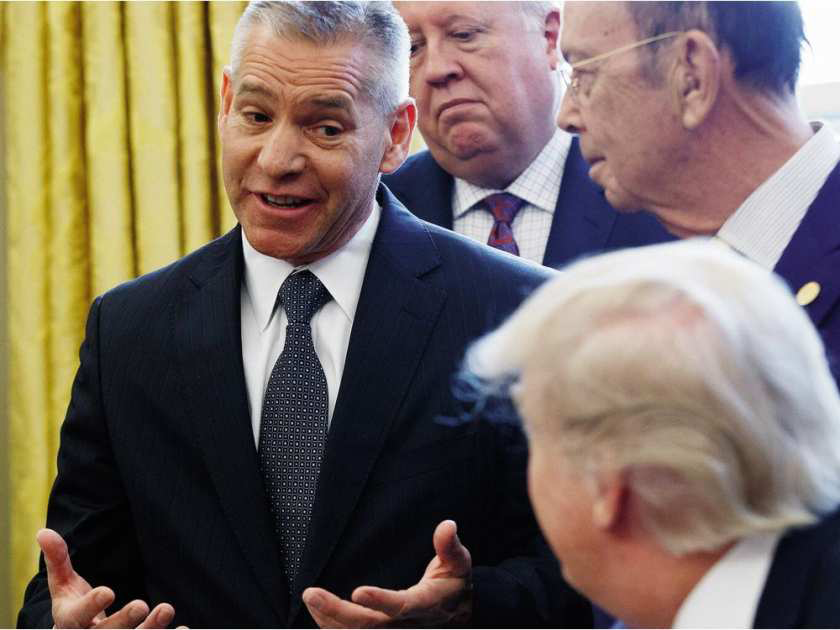 In April 2011, the New York Times published an editorial cartoon depicting eight U.S. presidents — from Nixon to Obama — with a caption that read: “We must decrease our dependence on Mideast Oil.”

TransCanada Corp. was at that time three years into its application for the Keystone XL project, to extend a pipeline that would connect crude from Alberta to the U.S. Gulf Coast.

Obama’s inclusion in the cartoon remains ironic, given he did nothing to further the U.S. quest for energy independence during his eight years in office. By rejecting the Keystone XL project late last year he instead put that goal even further out of reach.

That all changed Friday — what’s become a favourite day of the week for White House announcements on KXL — when the U.S. State Department officially granted Calgary-based TransCanada a presidential permit for the project. The announcement included a news conference featuring President Donald Trump and TransCanada president and CEO Russ Girling.

Approval of Keystone XL will be seen as an important step toward establishing a more integrated North American energy market.

“This decision shows the energy economy is integrated between Canada and the United States,” Natural Resources Minister Jim Carr said Friday. “The construction of this pipeline is in the interests of both countries and meets goals that are aligned.”

KXL was conceived when benchmark WTI was trading at double today’s price — US$48.14 a barrel on Friday — supply and demand projections were very different and the potential of the Permian Basin in Texas had yet to be unleashed.

Some question if the Keystone XL pipeline is still needed since U.S. oil production continues to increase. There is also the question whether carbon pricing is necessary with approval now granted, or if access to offshore markets remains imperative.

The answer to all of these questions is yes.

While it’s a different playing field compared to July 2008, when TransCanada first filed its application, the U.S. refining complex in the Gulf Coast needs the heavy barrels produced in Canada, says Jackie Forrest, director of research at the ARC Energy Research Institute.

“There is still a lot of demand for heavy crudes,” she said, noting imports into the U.S. from Mexico and Venezuela have declined.

“The US is growing light oil production, not heavy, and the refineries prefer to use the heavier barrels because they are cheaper and can also produce more products than a light barrel,” said Forrest.

“We have to plan these projects further out and we need to have access to other markets,” he said.

However, much to Trump’s chagrin, KXL is not shovel ready, with permit approvals still needed from Nebraska.

The question now, though, is whether TransCanada chooses to begin work on the northern section of the project, without the Nebraska permit, or waits until that’s in hand. It’s also unknown if shippers that originally backed KXL are still committed to the project.

That Girling was in Washington with Trump to announce the presidential permit approval suggests Keystone XL has the commercial support it needs to move forward. Girling would not have been there if it was a long shot.

As to whether carbon pricing is still important following the KXL approval — it was seen as the quid pro quo needed by the previous U.S. administration — the answer to that is yes.

“Having a credible carbon policy is part of this entire equation and it is not license to go back to climate denial,” said Dennis McConaghy, author of Dysfunction: Canada after Keystone XL, the recently published book on the KXL saga.

The principle of economic growth and environmental stewardship was reinforced by Prime Minister Justin Trudeau when he spoke to international delegates at the recent CERAWeek conference in Houston, and was reiterated by Carr on Friday.

“We say all the time economic growth and environmental stewardship go hand in hand and it’s not one or the other, it has to be both,” said Carr. “The Alberta climate plan, the 100 megatonne (emissions) cap and the Pan-Canadian framework gives us room to approve infrastructure.”

It remains to be seen if the three recent pipeline approvals will reignite investment in Alberta’s energy sector. There has been a dearth of new investment in the oilpatch since oil prices collapsed in 2014.

Tim McMillan, president of the Canadian Association of Petroleum Producers is optimistic. He said Keystone XL is an important step, connecting the world’s third-largest oil resource to the world’s largest refining complex.

“Everyone who is making long-term investments in Canadian energy wants to know that we are going to continue to build pipelines at a pace that keeps up with our production,” he said. “People who were waiting for a signal got a very strong signal today.”

This is not yet a done deal, however. Approvals are still needed from Nebraska and opposition is expected from a number of non-governmental organizations.

Still, the significance of Friday’s announcement should not be underplayed.

Simply put, not only does it set up the possibility of achieving something U.S. presidents since Richard Nixon have articulated but failed to achieve — decreasing American dependence on oil imports from the Middle East — it ensures Canada will play a critical role in reaching that objective — to the benefit of all Canadians.

Photo Caption: TransCanada CEO Russell K. Girling speaks to President Donald Trump in the Oval Office of the White House on Friday, March 24, 2017, during an announcement on the approval of a permit to build the Keystone XL pipeline, clearing the way for the $8 billion project.